$0 or a Million Dollars? 10 Bitcoin Price Predictions from Leading Minds 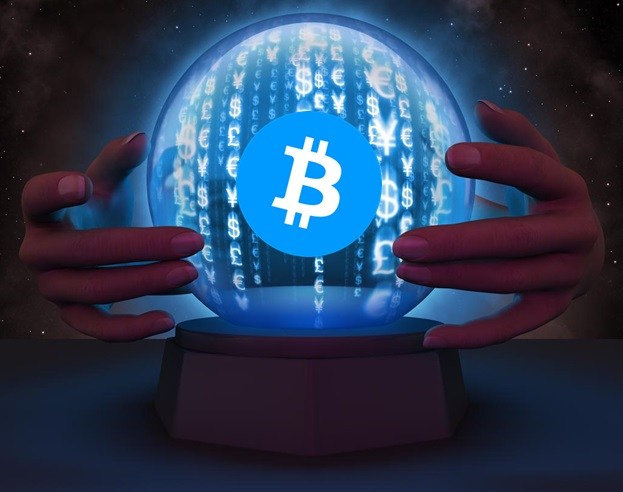 There are a lot of interesting questions when it comes to bitcoin but none so much as the all-time favorite of analysts, speculators and sideliners alike: How much will bitcoin be worth in 5 years? In 10? Will it go to the moon or crash and burn to a big fat zero?

Sizing up bitcoin is no small task but that hasn’t deterred plenty of people from trying.

Back in January 2009, when the bitcoin network first came into existence, the very first bitcoins issued were worth a few cents. They steadily rose in price over the next year, topping out at a whopping $0.29 cents per coin in December 2010. The year 2011 saw bitcoin reach new heights, with highs as high as over $20 per coin, only to go back down to a few bucks.

After witnessing the wild price hikes – and subsequent drops – Forbes commented “So, That’s the End of Bitcoin Then.” Wired magazine agreed, dubbing bitcoin ‘expired’ in its Wired, Tired, Expired for 2012 feature.

When bitcoin started ascending to lofty heights in 2013, Wall Street Daily compared bitcoin to tulip bulbs and advised investors to “Beware of This Insidious New Currency Scam.” As bitcoin climbed steadily back down, there was no shortage of commentators gleefully proclaiming that “The Bitcoin Bubble Has Burst” and smugly confirming that “bitcoin’s path to the grave has always been fairly clear.”

When bitcoin refused to die but instead climbed ever higher, more bitcoin price predictions were made. A finance professor writing for Business Insider predicted “Bitcoin Will Crash to $10 By Mid-2014.”

As we all know, that didn’t happen. And despite the dip that lasted through 2014 – and the negative price predictions made then and since – we’ve seen 2017 herald in a year of bitcoin consistently reaching and breaking through new all-time highs, rising over 1,600% in just the past year.

And if you’ve been rooting for bitcoin all this time, it’s fun to feel smug but remember that hindsight is 20/20 and none of us really know what the future holds.

Let’s start with a humble prediction that doesn’t seem so out of reach at the moment, made a few months back by Tom Lee, the chief US equity strategist for JP Morgan and now the founder and head of Fundstrat Global Advisors.

His reasoning was two-fold, hypothesizing that since bitcoin’s supply grows even more slowly than gold, investors will look to bitcoin as a more attractive gold substitute, eventually cannibalizing the demand for gold. At the same time, he expected central banks to start buying bitcoin once the total market cap hit $500 billion.

A few months later, Lee shared another prediction – that bitcoin could reach $25,000 in 5 years, a valuation based on Metcalfe’s Law, which theorizes that the value of a network is the square of the number of users.

Not everyone is so bullish. There are those like Roy Sebag, a gold bug investor and the founder and CEO of GoldMoney Inc.

What’s his bitcoin price prediction? Sebag was once a bitcoin bull and an early investor of bitcoin but now he says that bitcoin has “completely devolved from the original promise” and that “bitcoin and cryptocurrencies in general are exhibiting a mania, fueled by speculative fervor.

As such, he’s sold most of his 17,000 bitcoin this summer because he believes the long-term value will be zero.

Joining the fray of bitcoin skeptics like the infamous Jamie Dimon is Kenneth Rogoff, a professor of economics at Harvard University, a grand chessmaster and a previous chief economist for the IMF.

What’s his bitcoin price prediction? Rogoff predicts bitcoin’s demise but he doesn’t go into specifics, only stating “Is the cryptocurrency Bitcoin the biggest bubble in the world today, or a great investment bet on the cutting edge of new-age financial technology? My best guess is that in the long run, the technology will thrive, but that the price of Bitcoin will collapse.”

Then there are more short-term predictions, like this one from billionaire former Fortress hedge fund manager, Michael Novogratz.

“It easily could,” Novogratz told CNBC. And it’s not just bitcoin that will continue to reach new heights – Novogratz also expects bitcoin’s rival ethereum to “triple from where it is as well.”

Novogratz isn’t just making predictions – he’s putting his money where his mouth is, with “over 20 percent – maybe even 30 percent” of his net worth in cryptocurrencies, split roughly in half between bitcoin and ethereum.

In years past, bitcoin bears were a lot more willing to make exact predictions. But lessons have been learned – particularly from the case of Professor Mark Williams who predicted bitcoin would be worth $10 by 2014 and was dubbed ‘Professor Bitcorn’ for his efforts.

What’s his bitcoin price prediction? Stiglitz has been a staunch opponent of bitcoin, stating that bitcoin should be outlawed and claiming that “it’s a bubble that’s going to give a lot of people a lot of exciting times as it rides up and it goes down.”

And down is where he expects it to head. Especially when and if governments get involved. “They [governments] can close it down any moment and then – it collapses.”

Back in December 2016, Saxo Bank published a forecast calling for bitcoin to rise 165% from around $750 to $2,000 in 2017, mostly spurred on by Trump’s spending and the dollar rally. Now, one of the analysts behind the forecast – Kay Van-Petersen – has more to say about bitcoin‘s long-term future.

What’s his bitcoin price prediction? Van-Petersen expects the price of a single bitcoin to reach just over $100,000 in the next 10 years. He arrived at his estimate by dividing the 17 million bitcoins that are expected to be in supply by 2027 by the potential market cap of bitcoin in the next 10 years, which he estimates to be $1.75 trillion.

Saxo Bank’s Kay Van-Petersen may have been optimistic on CNBC, but in Saxo Bank’s Outrageous Predictions for 2017 report, he and his co-author, Jacob Pouncey, aren’t so positive about bitcoin’s future.

What’s their bitcoin price prediction? In the Saxo report, Van-Petersen and Pouncey predict that bitcoin will be thrown to the wolves. But first, bitcoin will peak to above $60,000 in 2018 mostly thanks to the investor funds that enter the market due to bitcoin futures. 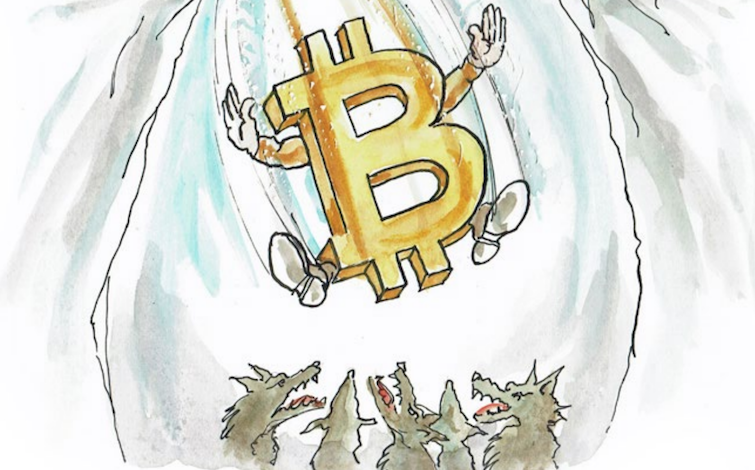 “Before long, however, the Bitcoin phenomenon finds the rug torn out from under it as Russia and China move deftly to sideline and even prohibit non-sanctioned cryptocurrencies domestically. The smoother functioning of the state-run protocols for actual payments and price stability, as well as the the heavy hand of state intervention, drives a decreasing interest in all cryptocurrencies and completely sidelines the Bitcoin and crypto phenomenon from a price speculation angle even as the technological promise of the blockchain gallops on.”

And finally: “After its spectacular peak in 2018, Bitcoin crashes and limps into 2019 close to its fundamental “production cost” of $1,000.”

Sure, $100,000 per bitcoin is great but who wants to wait 10 years? Not Jihan Wu, a bitcoin mining magnate and the co-founder of BITMAIN, one of most recognized and valuable bitcoin companies.

What’s his bitcoin price prediction? Wu is confident that bitcoin’s price will continue to soar. In an interview with Bloomberg’s Tom Mackenzie, Wu shared that he sees the bitcoin price going up to $100,000 in 5 years.

Think $100,000 is a huge prediction? Not for John McAfee, the multi-millionaire cybersecurity guru who’s best known as the founder of his namesake antivirus software company.

What’s his bitcoin price prediction? McAfee is passionate about cryptocurrencies and never one to water down his speech with understatement, confidently claims that bitcoin is headed toward the $500,000 mark within the next three years. He’s so confident, in fact, he’s made a very high stakes bet… 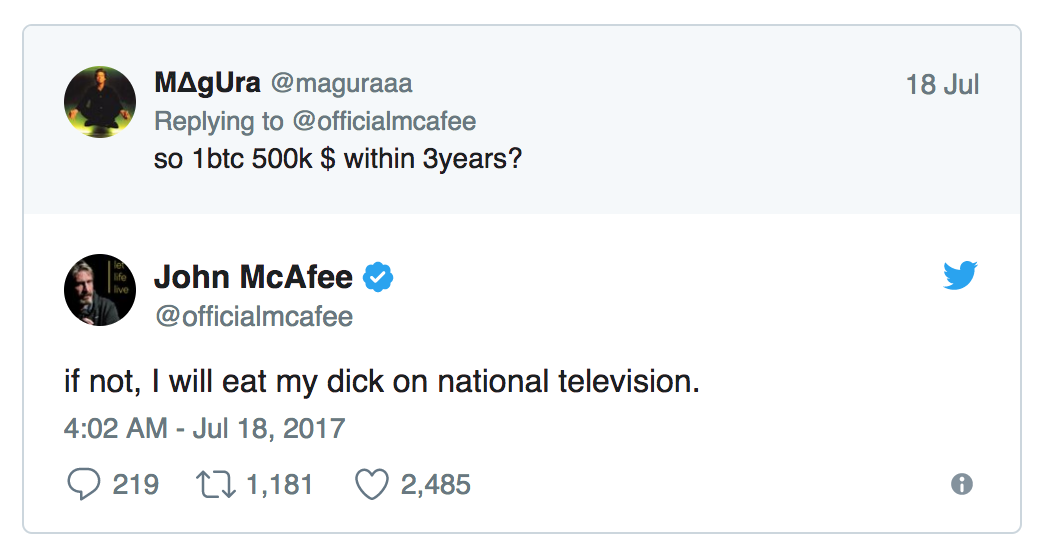 All jokes aside, he then went on to predict that actually, bitcoin could even reach as much as $2.6 million within three years. And then proceeded to promote his new token, the McAfee Coin (MCF).

Okay, McAfee may have pulled that number out of thin air but Jeremy Liew, the first investor in Snapchat, and Peter Smith, the CEO and cofounder of Blockchain can explain the rationale behind their bitcoin price prediction.

They also believe that the atmosphere of political uncertainty in developed nations as well as developing countries will push more people to buy bitcoin as a safe-haven investment like gold. And finally, Smith and Liew think that the use of smartphone transactions will open the door wide for bitcoin – so wide, in fact, that they estimate bitcoin could account for as much as half the world’s non-cash transactions by 2030.

There are a lot of bitcoin enthusiasts around but few quite as dedicated as Wences Casares, who’s been called the ‘patient zero’ of bitcoin among Silicon Valley’s elite. The Argentinian-born serial entrepreneur has dabbled in – and succeeded – in several businesses from an internet service provider to a video game company.

But it’s bitcoin that he’s dedicating the rest of his life to, and now he runs a startup called Xapo that’s famous for being the “Fort Knox of Bitcoin.”

What’s his bitcoin price prediction? Casares may be devoted to bitcoin but he has level-headed advice to share. According to the Xapo CEO, the advice he doles out to people looking to invest in bitcoin is simple: “Take 1% or less of what you own, buy bitcoin with it, and then forget about it for at least the next five years; ideally the next decade. You either lose one percent of your net worth, which most people can take, or you make millions.”

The formula is based on Casares worst case/best case scenarios for bitcoin. He pegs the odds of bitcoin failing and going to zero at 20%. As for the odds of bitcoin succeeding? He sees the chances of success at greater than 50%. And if it succeeds, he predicts that each bitcoin will be worth more than a million dollars.

As you can see from the above bitcoin price predictions, not everyone’s crystal ball is in agreement. Which just leads us to re-affirm that wise Danish proverb: Predictions are hard, especially about the future.